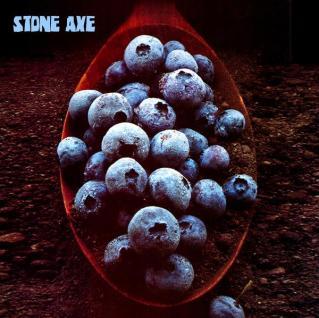 This is the official re-release of the debut Stone Axe album in a deluxe package. The two disc set features 8 bonus live tracks on the original 10 song CD and over 70 minutes of video footage captured throughout the bands career on the DVD. Includes a 6-page fold out booklet with liner notes written by The Obelisk's JJ Koczan.

"You may like classic rock, but I bet you don't like it nearly as much as Tony Dallas Reed. The Mos Generator frontman's new project, the two man Stone Axe, is essentially a ten song lesson on what The Riff was like when mutton chop'd giants walked the earth. Highlights? The whole album, really. While Reed does an impressive job making it seem like the work of a full band knocking out the songs live in the studio (he's credited with all instruments), Brinkerhoff also deserves praise for his vocals. He falls somewhere between Paul Rodgers and David Corverdale back when he was taking orders from Richie Blackmore. It's a powerful voice that's as soulful as it is gritty. You like Cream, Free, Thin Lizzy, The Faces, AC/DC, and Deep Purple? You'll enjoy the hell out of this impressive debut." -- Arzgarth (Stonerrock.com)

"Mos Generator frontman Tony Reed has released a very focused and to the point album with his new project. These guys lug out the massive sounds and they begin spinning them around, manipulating and pulling us with them. The music is basic at its core, but undeniably mesmerizing. Quite simply they know how to create the kind of music that celebrates the essence of what once made rock music great and craft the kind of guitar riffs that will pull in all who hear." -- Heavy Metal Time Machine

"This is great modern classic rock" - Get Read to Rock

"At ten tracks and just under forty minutes it’s practically filler free and the perfect listening length, way short of overstaying it’s welcome, whilst the intriguing cover image simply suggests that further investigation is necessary. In fact, I’d say its near essential… another contender for Album Of The Year for me without doubt." -- Rock of Ages

"While the Guitar work is the major force here,its also the vocals of Dru that also stands out.His voice is Phil Lynott meets David Coverdale and so much so,you will think you are listening some long lost 70's band record." -- Doomnatia

""If you missed out on 2009's self titled release from Stone Axe then you missed out on of truly one of the best fantastic classic hard rock albums released in recent years. This is one of those albums that just gets better each time you play it. This time around in addition to the original studio album we get a pile of live tracks added onto the CD. If you like what you hear on the studio recordings then you are really in for a treat because the band sounds even more at ease on stage. So did this album deserve a collector's edition? After listening and watching both discs my answer is a definite yes. This a fantastic set and even if you have the original disc it's still worth getting because all the extras will make you appreciate this band even more." -- Heavy Metal Time Machine

"Ripple Music unleash a reissue that was on the top of my top albums for 2009. You will not be disappointed. The real treat here is the original studio album, 8 bonus live tracks and a DVD with videos, live material and interviews. If you've heard the original release, you know how good the songs are. That's a lot of (welcomed) Stone Axe music. For those who have yet to listen to Stone Axe, this is a great starting point. Imagine old classic rock bands like Thin Lizzy, Free, Molly Hatchet, and Bad Company (among many more). The included DVD is a real gem. A lot of the material has been found on YouTube in ok quality before but now it's available is high quality video for the first time. I've been a fan of Stone Axe since the first time I heard their music on Myspace many moons ago. I own 4 versions of this album (2 CD, 2 LP). This is the best version yet." -- The Soda Shop"