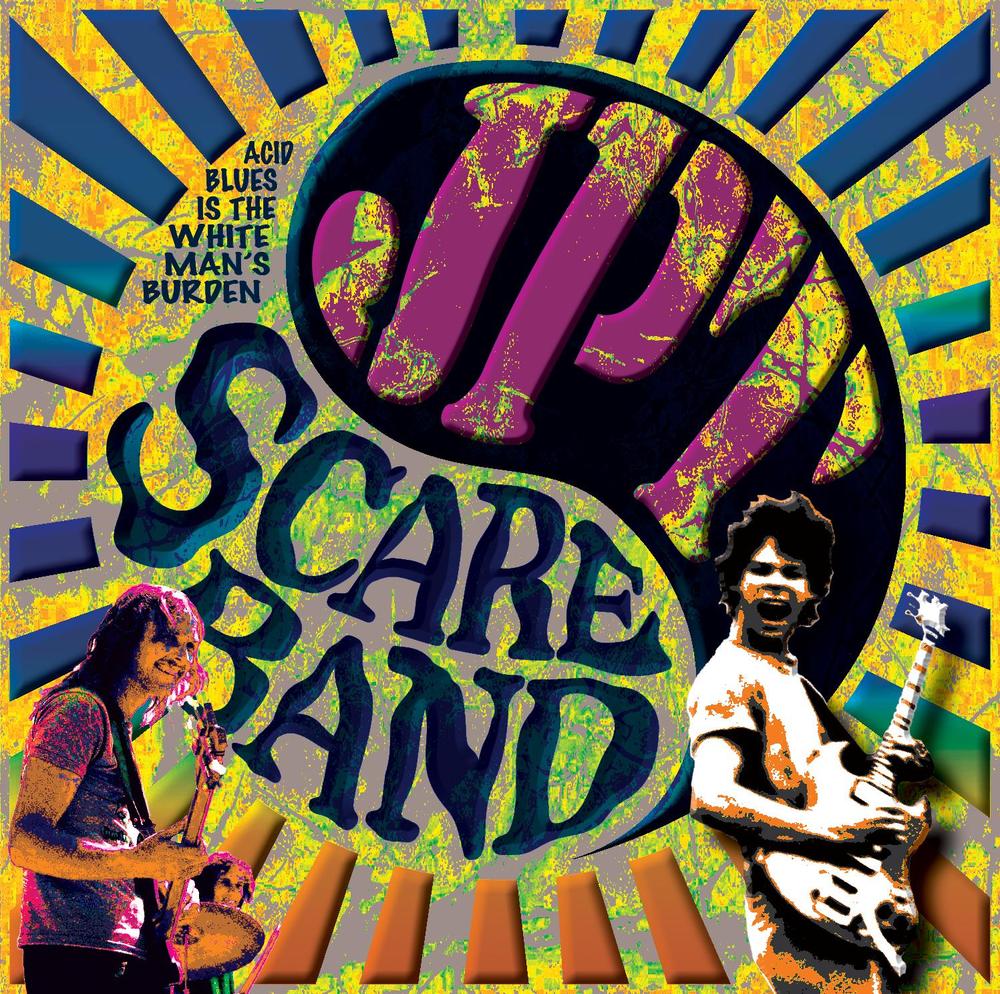 First release of archival material from the legendary proto metal/psychedelic Acid rock band, JPT Scare Band. Named by Classic Rock Magazine as on of the "lost pioneers of Heavy Metal," Acid Blues is the White Man's Burden collects 7 tracks of of never before released manic riffing, intense jamming, and acidified blues, all recorded by JPT from the mid seventies to the early 2000's.

Featuring the mind blowing guitar mastery of Terry Swope, this is a collection no fan of proto metal, psychedelic acid rock, or early 70's rock should miss.

"Each track sizzles with nostalgia, with fuzzy guitars, gritty vocals, and extended jam sessions that instantly transport you to what feels like a Hendrix concert. Everything grooves in its own right. . . will undoubtedly dazzle fans of classic blues rock. Terry Swope has got to be one of the world's most underrated guitarists!
If you miss the glory days of Cream, Deep Purple, and Jimi Hendrix, you have to check out these uncovered gems from JPT Scare Band." -- Bill's Music Forum and the Rock and Roll Report.

"Acid Blues Is the White Man's Burden, seven lengthy psychedelic bluesy rock stompers (nine of the vinyl version) that come howling out of the speakers. This is Classic Rock from the Golden Age! Holds its own against their famous niche sharers, such as Cream, Ten Years After, Rory Gallagher and the mighty Led Zeppelin. Singer Swope has the swagger and the chops, and the rhythm tandem of Jeff Littrel and Grigsby are solid and smooth. It just goes to show that it's never too late to be recognized as an interesting chapter in the Big Book of Rawk." -- Here Comes the Flood

"A Gem to treasure. Let the hypnotic music swirl around you. For anyone who wishes to delve into the heritage of the current crop of stoner bands, this is an unmissible compilation. Terry Swope rivals some of the day's greats including Clapton and Hendrix. JPT Scare band are the unsung heroes of the cult rock scene and now they have decided to remind the world of their phenomenal abilities. "Long Day," is fresh, a great introduction to the band. Centerpiece "Stone House Blues" recalls the excellent Led Zeppelin at the BBC disc with it's loose and thundering bass. "I've Been Waiting" has a riff so heavy it could be encased in lead. Sits comfortably along side Black Sabbath." -- Sonic Abuse

"Album of the Day!" - Roadburn.com

"Acid Blues is the White Man’s Burden is without question one of the most natural sounding and charismatic records I’ve heard this year. At once celebrating what they were and what they are in a way few bands can actually pull off convincingly. Littrell, Grigsby and Swope show remarkable chemistry. Swope’s leads are not to be understated. The soul in what he does is so up front it’ll bring a tear to your eye. JPT Scare Band are able to harness what made heavy ‘70s rock so influential without sounding like they’re ripping anyone off, including themselves. If you’re not moved by the way these three players work together in the jammed-out last minutes of “I’ve Been Waiting,” you’re just not getting the point. Acid Blues is the White Man’s Burden might be a sleeper, but for those who discover it, it’s treasure." -- The Obelisk

"Compiled from studio outtakes spanning over 35 years, that this album hangs together so coherently and is wall to wall with the highest quality tuneage is a testament to just how incredible this band really is. An orgasmic display of sonic abuse from guitarist Terry Swope. Fuck me, this guy is a lost gem!!! Blazing with a technique that would make most big haired 80's shredders shit their pants but grooving with a feel that would make Billy Gibbons weep, Swope lays on note after note of pure class. This is certainly no one man band though, bassist Paul Grigsby lays down such a filthy groove that you want to take a shower afterwards and drummer Jeff Litrell swings like an aging virgin's nut sack!!! The charm of JPT Scare Band...it's passion that is both seductive and enthralling and a passion that seems unabated by years in the undergrowth." -- Sleeping Shaman

"You may not have heard of them the first time around, but retro riff-rock enthusiasts would be wise to keep their eyes out for the double LP version of this record." - StonerRock.com