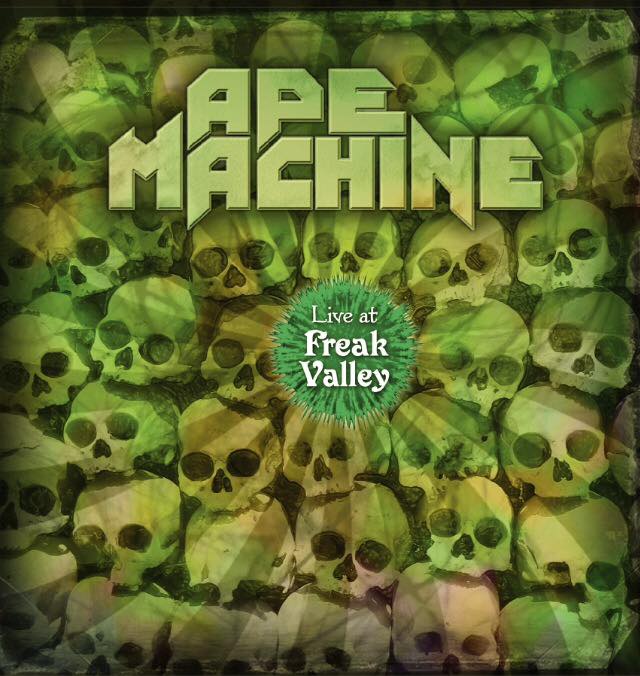 Here it is! The critically-hailed performance that Ape Machine gave to a sold-out audience at Freak Valley 2014. LP has 11 blistering tracks of all out riff-mad, guitar heavy rock, including a cover of Deep Purple's "Black Night"

Included in a pocket inside the gatefold cover is a DVD of the full show with bonus songs.

"Hard to think of a band from Portland, Oregon, these days as being underrated, but Ape Machine fit the bill all the same. The four-piece of vocalist Caleb Heinze, guitarist Ian Watts, bassist Brian True and drummer Damon de la Paz played Germany’s Freak Valley festival as part of a 2013 European tour in support of the then-recently-released Mangled by the Machine, their third album and Ripple Music debut, and accordingly, most of what shows up on the 48-minute Live at Freak Valley comes from that record, later album cuts like the swaying “Strange are the People” and stomp-slide-fueled “Ruling with Intent” leading to a run through Mangled by the Machine’s first five tracks, in order, to close the set. With a cover of Deep Purple’s “Black Night” (something they also did on their second record) in tow with others from their first two records, Live at Freak Valley makes a solid intro to a group more people should know. " The Obelisk

"As the title suggests, this is a live album recorded at Germany’s Freak Valley festival in 2014 which is one of Europe’s top festivals for heavy psychedelia and stoner rock and this album showcases Portland stoner rock titans Ape Machine on full power and in their natural habitat, live on stage and Live At Freak Valley features a high spirited performance complete with a brilliant on stage sound, sometimes this can hamper a live recording but this is not the case here at all, this is Ape Machine firing on all cylinders live!Ape Machine are a fine live band and Live At Freak Valley shows just how fine you are and this release is available as an LP/DVD package and is definitely a fine way to watch and listen to the band on stage and having done so you won’t want to miss them live when they tour next." -- Circuit Sweet