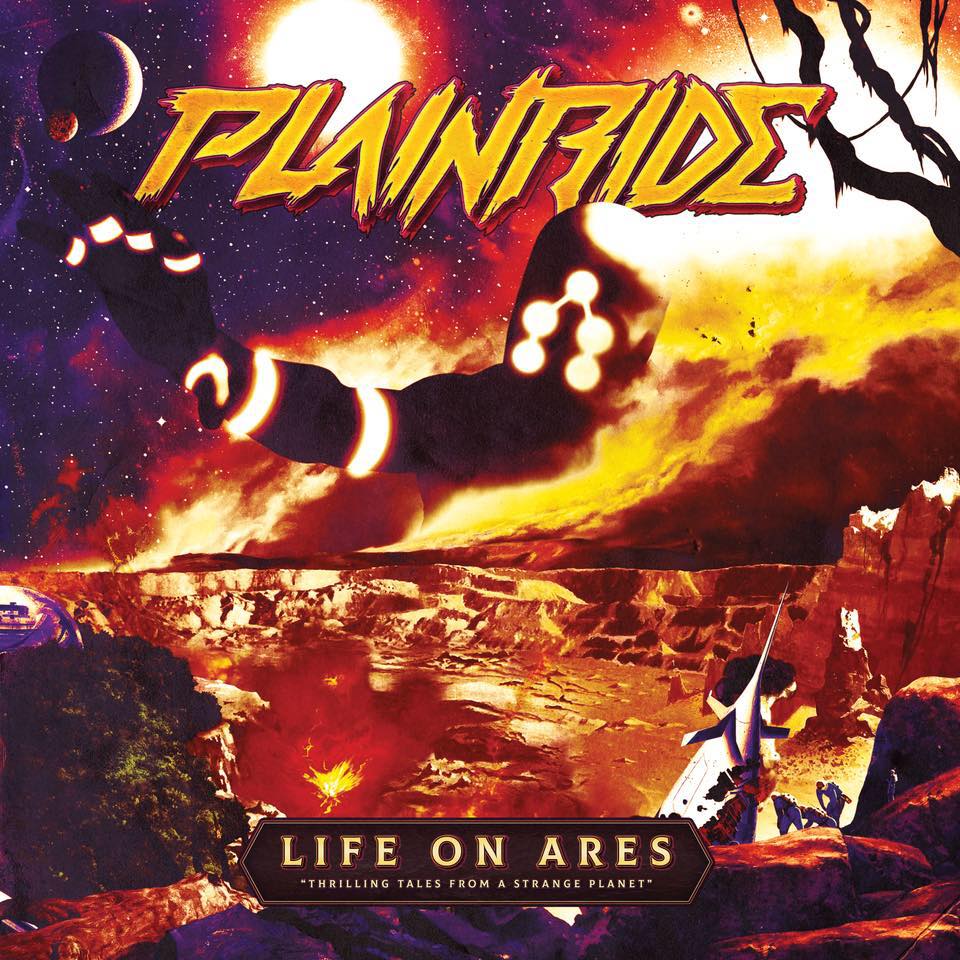 “Every now and then, Cologne’s dusty streets bear something amazing. Plainride for example. These four guys shred out some heavy groovin’, fuzzy Stoner Rock that doesn’t fall the least bit short to their American colleagues.”
ROCKHARD

“Plainride deliver professional grade heavy rock and roll with little concern for the bruises left behind afterwards.”
THE OBELISK

If you’ve yet to discover the fuzz-filled; hirsute’d, and suitably hardrock booted Plainride, then fear not; this September will see the official worldwide release of the Colognians sophomore album, Life on Ares, an endeavour fuelled in collaboration with Californian record label, Ripple Music.

Following up on the success of last year’s “Extremely compelling debut,” (Metal Hammer) – Return of the Jackalope – the German quartet are back to help contain the menace of many a sleepless night for scientists across the globe. With jetpacks on backs and the discovery of alien worlds in their sights, Plainride continue to explore worlds hitherto unknown, break new ground and assert themselves as the rising stars of Germany’s growing Stoner Rock scene.

Headed up by eccentric riff/noble-man Fabe "van Fuzz" Klein, renowned Europe-wide as the heir to a shady fortune, van Fuzz has enhanced his adventures with the purchase of fine instruments and occult artefacts alongside fellow axe-slinger, vocalist and confidant, Max Rebel. A man who legend has it escaped a seedy orphanage and misspent most of his youth, before discovering unique superpowers; the gift of gab and extremities of pure rock ‘n’ roll. (He just knew his time had come.)

Seeking further counsel, van Fuzz and Rebel rescued bassist Leo "Lionthatch" Beringer from a caste of clerics in a monastery, hidden away from the filth and fury of the big cities. He quickly developed a keen sense for the gossamer threads binding the physical to the spiritual worlds and served as the perfect rhythm buddy to new drummer/landed gentry member Florian “The Brave” Schlenker. (Rumour has it, Schlenker has plundered countless armouries in his time to blow many a hole in the East Wall, always in the name of Rock ‘n’ Roll.)

For mix and mastering of their biggest and boldest record to date the band hired American producer and sound engineer Alberto de Icaza (Clutch, Crobot), the artwork was crafted by Milan-based artist SoloMacello, and the recording itself was done by musician and producer Marius Ley (DAT ADAM):

“Back when we did our debut album Return Of The Jackalope, it was recorded deep in the woods of Poland – live and not always sober,” explains Rebel. “Life on Ares on the other hand came into existence in the heart of Cologne, at Marius’ Hydra Lab. Not to say there wasn’t any beer involved this time but the whole process was just way more surgical. Working like that can easily see you go from two weeks studio time to two months. The level of detail we employed this time truly was a new experience for us and at the same time opened up a whole bunch of possibilities.”

Steadily spreading their grooves like the venomous tentacles of a galactic space toad, Plainride conquered the stage at this year’s Wacken Open Air, scored a feature on Spotify’s official Stoner Rock playlist, and have opened for the likes of Fu Manchu, The Atomic Bitchwax, and Nashville Pussy in their time. Now signed to Ripple Music, who knows exactly where in time and space Life on Ares will take them. Take a seat, strap yourselves in and come along for the ride.